I cannot believe it’s over two years since I got back from Caper Crozier in Antarctica and finally Disney Nature’s Penguins, Disney Nature is out in theatre’s in the US. Wanted to do a post but found an email I’d written to my brother which pretty much sums it up, so thought I’d just post that instead!

Also here’s a wee National Science Foundation behind the scenes film made by the lovely Ralph Maestas of Julie Moniere and I, in what looks like a rather way to balmy Cape Crozier.

“Finally made it to Cape Crozier.

Imagine, if you will, steep shingle hills next to the catchily named Mount Terror sloping fiercely to the Ross sea covered in ice and ice floes as well as open water. And cold, of course it’s cold but it’s that dry, wind chilling, biting cold that is fine with the right amount of layers on everywhere bar your hands. Poor hands. The two tents for us are near a sort of pig pen called the Rack tent, @5m wide and 4m long, where we keep all the kit, good and bags as our tents get very icy or wet depending on weather – my camp bed is currently balanced in a sea of icy puddles, have to be careful when crawling out of the ultra fat down sleeping bags for work.

The day we arrived Julie (Julie Moniere, another of the principal camera team) dragged me up the nearest hill, Observation hill as it’s known (those 19th Century scientists, so imaginative…bloody hardy though Cherry Gerard & co came here in 1905 during the midwinter when there is no daylight, insane.) She kind of tadaaaaa’d when we got to the top and I oohed as it’s spectacular. It took me a moment to realise that the gravel on the hills below where she was gesturing were in fact half of the 660,000 Adelie penguins that make up this colony and the noise bubbled up to the hill top – there are no words and I doubt anyone could take it in unless here, our challenge on this film will be to convey the immensity of the spectacle. 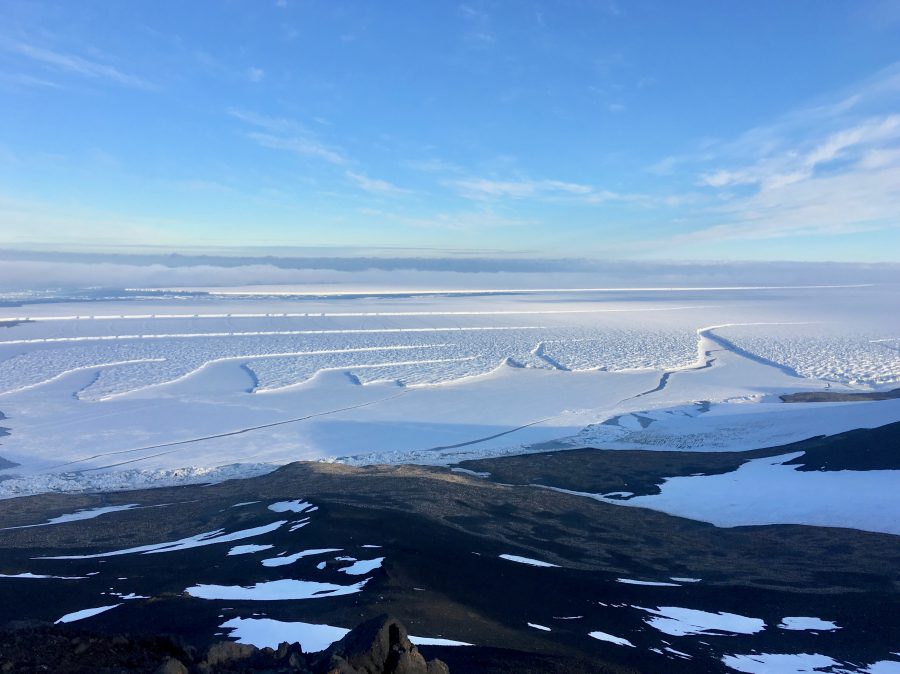 The walk down to the colony is a little like a Hobbit journey, first the treacherous ice/snow covered hill – crampons or yaktrax (a light weight crampon velcro slipper) mandatory for about 3/4 of a mile then a sharp right through the shingle valley of sky attack aka skuas (who are utterly brilliant and fiercely cruel, they dive bomb you as they’re nesting), into the penguin colony where you have to dodge around the clusters of chicks and adults who growl if you get too close, then it’s down a vertical rocky strewn hill to the sea, all in all, 1.5 miles of serious downhill. We stay down in the colony for about 8-10 hours and then embrace (bulls*t) the climb up, it would be accurate to say i bloody hate it, Jane Fonda has nothing on this workout. The penguins themselves are bloody brilliant, worth every trek up and down and more, yesterday we did it twice as we had a 4am start for some time lapses. Genuinely i have not met a more charming subject. There’s something industrious, captivating and absolutely hysterical about them and they’re SO BUSY – climbing these massive hills on their tiny legs, like windup toys not stopping for anyone or thing and then there’s the chicks. I just can’t do them justice. Soft downy grey fat arsed triangles with droopy shoulders (all look very depressed), cartoon eyes and huge feet. I want one. They wait patiently like crashed out teenagers, face down with legs out behind their massive grey bums, stubby little wings to the sides flapping occasionally until a parent comes home – and then it’s launch time. Google Adelie chick chase and you should get an idea. The best thing I’ve EVER see and everywhere you step or kneel down there’s the smell – suffice to say Chanel will not be doing an aroma de’penguin anytime soon.

We’ve been weathered in for about three days now, the beginning was gentle enough, a few 60mph gusts…in fact we were so optimistic we went off to our tents having been in the colony all day. The tents are pretty much as they were when Scott used them, fastened with rope, no zips. Two openings and at some stage they must have undone allowing a light dusting of snow to accrue on my camp cot. I spent a while getting the snow off and trying to close the tent, drifted off but the next sprinkling of snow was quite wet so I thought I’d head down to our neighbours the penguin scientists tent, @15m away down hill. They’d said if the wind got over 80mph it wouldn’t be a bad idea. the only thing is, what does 80mph sound like? EVERYTHING sounds loud in a yellow cotton tent.

Honestly, should have thought the possibility of storm through slightly better. A Guernsey and fleece jog bottoms were not quite sufficient and I stumbled into the warmth of the hut to be greeted by “you did well, you lasted out to 92mph.” Thanks, I hadn’t meant to. The ‘rack’ tent is 30m up the hill, not storm rated and a tad noisy. Snow also comes in, as it turns out. So we moved into the hut and watched the weather monitor clock winds of 102mph.

Now that family is WILD camping.

The loo door blew off, turning our rather sweet outside loo into a snow filled freezer and when this stops we will have to spend a day fixing everything, both our tents have ripped and everything in the main tent is covered. God knows how the kit is in the colony…The scientists hut is 3m x 6m approx with 4 bunks which take up half the space, a table, cooking area, snow melting bit, radios and tbh it could be classified as claustrophobic however right now it feels like heaven (that any port in a storm thing is true!) and we’ll sleep here again for the second time tonight.